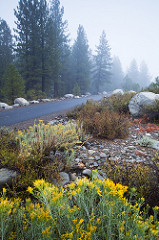 The Town of Truckee recommends that common trail etiquette be followed for users of the trail network. This includes an emphasis on courtesy and cooperation with others rather than a restrictive set of edicts. The recommended trail etiquette is outlined below:

This etiquette is based upon successful trails in other areas. At this time, the Town is not proposing rules or regulations for any of Truckee’s trails. However, the Town recognizes the importance of users following commonly-accepted trail etiquette to ensure that rules do not need to be established in the future. Truckee’s trails have been designed for multiple user groups. Following commonly-accepted trail etiquette will minimize the inherent conflicts which can arise from varied user groups. While no formal trail rules were adopted as part of the Trails and Bikeways Master Plan, the trail network is restricted to non-motorized users, with the exception of emergency and maintenance vehicles.